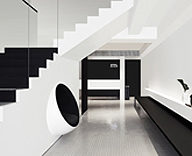 Hotel Mono is a striking new landmark in the historic Chinatown area in Singapore, the result of an extensive refurbishment of six heritage shop houses. The project transformed a oncesqualid budget hotel into a chic haven of 46 rooms that radiate a minimalist, yet assertive design language. One of the main challenges faced was the client’s limited time and budget.

When coming up with the design language for the hotel, the architect wanted to create something that would stand out for not conforming to the standard expectations of what hotels

should look like. Many hotel designs are forgettable for their similarity to each other. Not wanting to pander to the clichés of nostalgia and tradition associated with Chinatown, the design aimed to create something simple, yet different, that still communicated a Singaporean identity. This was keeping in mind that the design and visual branding of the hotel had tobe universal and attractive, and understood by people from all around the world.

The design identity of Hotel Mono begins from its facade, which is dressed in just black and white. This pared-down colour scheme emphasises the architectural as well as aestheticdetails of the neo-classical conservation shop houses, and also makes them stand out from the cacophony of colours along the street. The minimalistic aesthetic then continues in the lobby, with strong clean shapes making a statement – a 6m-long bench, the cantilevered reception counter, and the globe chair which ‘sits’ within a wall all provide a touch of the unexpected.

One key material used in the hotel is the 38mm-thick black square metal bar that flows through the white rooms like a line drawn in space. The bar is also used as a clothes hanger and a casing for lights. The second material is mosaic. This inexpensive material is applied in the bathrooms and in common areas such as the staircases and lobby. It ties in perfectly with the aesthetics of the hotel, with its graphic grid lines.

The hotel was named only after it was completed.