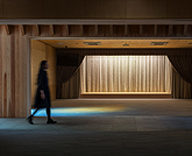 The aim of this project was to make the funeral ceremony familiar to those living in the urban environment. Until the 1980s, funeral ceremonies were performed inside the house in Japan. Over time, the ceremony space moved from private houses to the urban space.

The site of this building is Kasuga city in Fukuoka, which is a residential area with farms, rice fields and the big old houses of landowners. The client wanted to make a community-rooted ceremony space that could be used by several families.

The design features four gabled roofs assembled as one, which creates four halls and alleys of various sizes. When four gabled roofs are folded together in such a pattern, they form a basin shaped void in the center of the foyer.

Each family gathers for the ceremony in the halls. The alley between the halls and the foyer is a common space, but one person can pray alone beneath the opening of the void.

This building has been constructed using the Japanese traditional wooden framework construction method. Wooden beams, rafters and structural plywood constitute a roof. The gabled roof includes one roof for the hall and another for the alleys, connecting the divided volumes to bring the whole design together.

The differing finishing materials of the roof convey the three functions of the roof: waterproofing, structure and lighting. Metal sheeting protects people from rain and wind; rafters and structural plywood between the halls works to resist the horizontal force; and fiberglass reinforced plastics (FRP) panels work to disuse light, while the basin-like void reflects the diversified scenery of the sky.