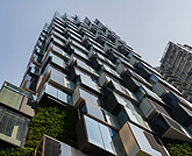 Hong Kong is one of the most densely populated cities in the world, and standing at the epitome of this density is the neighbourhood of Mongkok. Buildings within such a context have traditionally sought different ways to maximise their views while negotiating the issue of hyper density. The desire for views has historically created illegal iron balconies, which have grown to become part of the iconic Mongkok streetscape, forming an exquisite backdrop for the city.

Situated within such a context, the design reinterprets these illegal structures within modern statutory requirements. The programme of creating a serviced apartment within the density of Mongkok led the designers to consider the iron balconies a point of inspiration. Historically, many of the balconies were filled with plants as a form of personal garden in the sky. Bringing this concept into the building, a green wall seemingly protrudes from the solid parts of the podium, creating a visual reminder of the historical connection of the balcony. The green wall also serves a functional purpose as it enhances the quality of life for the neighbourhood and occupants of the building by increasing the provision of greenery at a pedestrian level.

The building is set back from the street to allow additional opportunities for the introduction of planting. As Mongkok is highly congested and densely populated, this siting allows space to breathe down on to the street, relieving some of the congestion and replacing it with greenery to provide a positive contribution to the neighbourhood.

This also transforms the outdoor landscape area into an urban backdrop for public areas of the project such as the entrance lobby at the ground floor and the transit lift lobby at the second floor. Borrowing elements from the traditional architecture of Hong Kong, the building becomes a contemporary interpretation of the challenges facing architecture in the 21st century.

“To get something with grain is quite stunning”.

“The building has a scale which is very human…. Emerges from a green façade and continues”

“Refreshing not to be seeing smoothness… has a sense of occupancy”

“I like how they have interpreted the legal side”