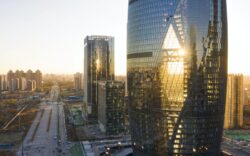 Leeza SOHO tower anchors the new Fengtai business district - a growing financial and transport hub between the city centre and the recently opened Beijing Daxing International Airport to the south.

Adjacent to the business district’s rail station at the intersection of five new lines currently under construction on Beijing’s Subway network, Leeza SOHO’s site is diagonally dissected by an underground subway service tunnel.

Straddling this tunnel, the tower’s design divides its volume into two halves enclosed by a single facade. The space between these two halves extends the full height of the tower, creating the world’s tallest atrium at 194m which rotates as the tower rises to realign the upper floors with Lize road to the north.

This rotation of the atrium intertwines Leeza SOHO’s two halves in a dynamic ‘pas de deux’. Acting as a public square for the new district and providing varying views due to its twisting, sculptural form, the tower creates a fantastic new civic space for Beijing that is directly connected to the city’s transport network.