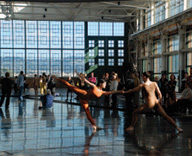 For over a decade, the City of Richmond, the National Park Service and other stakeholders have worked together with architects to reinvent Ford Point. With panoramic views of San Francisco, the peninsula was formerly home to the Richmond Shipyards and Ford Motor Company Assembly Plant. After both
factories closed, structures suffered further damage during a massive earthquake in 1989. The once blighted site has become a catalyst for economic and cultural revitalisation in a long disenfranchised community, providing jobs, transportation, cultural expression and pride of place for Richmond residents.

The Rosie the Riveter Visitor Education Center resulted from the transformation of the Ford Plant’s Oil House. Commissioned by the National Park Service, this history museum in an historic building on an historic site commemorates ‘Rosies’ whose legacy has had a sweeping impact on American society’s attitudes towards women and racial minorities in the workplace.

While San Francisco and Richmond face each other across the bay, access between them can be difficult. About 1.5 miles from the downtown core, the new WETA Ferry Terminal creates a crucial transport connection. After only two months of operation, ferry ridership has exceeded all projected numbers.

In addition to providing sorely needed infrastructure, the terminal is a striking landmark representing Richmond along its coastline. Lighting and signage transform the terminal from daybreak to nightfall; the precisely engineered facade is iconic, as are the panoramic Bay views. Its local impact is already being felt, not only as an amenity for citizens and visitors, but also as an economic and cultural revitalisation catalyst.