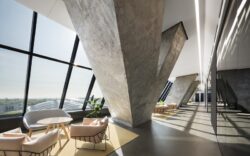 During the summer of 2018, Desjardins Movement’s online services' office spaces moved to the Montréal Tower. Unoccupied since 1987, the tower has transformed into an office space. The employees of the financial institution now enjoy modern workspaces, bathed in natural light, with a design adapted to the organic forms of the stadium. But to better reflect its new corporate vocation, the Montréal Tower had a major make over.

Designed by the architect Roger Taillibert, the original tower employed prefab concrete panels pierced with vertical strips of windows to provide the zenithal lighting suitable for its initial use. The architecture was originally designed to accommodate sports federations, and therefore had to be readapted to accommodate office employees. To achieve this result, almost all of the Montréal Tower's mechanical systems had to be renovated to bring them up to code and standards. Yet the biggest challenge was undoubtedly the stripping of the tower's concrete facings to make way for the transparency afforded by a glass curtain wall covering 60% of the façade—an essential element in creating a pleasant work environment.

Besides providing greater natural light and revealing the spectacular structure of this architectural icon, the curtain wall concept ensures great permeability between the tower's interior and exterior. The use of glass imparts elegance to the already slender tower. Spandrel glass is used to conceal the building's structures between floors, achieving a more seamless effect while maintaining the pronounced tapering effect as the surface area of each successive floor diminishes with increasing elevation, an essential aspect of the original design. The final result is majestic, with an overall coherence of the three façades whether viewed from near or from afar. The varying angles and proportions of the flat glass panels capture and reflect the surrounding urban environment with a gleaming fractal effect.

In spite of the project's geometrical and structural complexity, the design and construction teams were successful in organizing and executing on time a bold solution that is respectful of the original intent. Remarkably expressive and firmly anchored in Montréal's urban landscape as well as in the city's collective memory, the new tower is the culmination of an exceptional construction project in which the cohesiveness between the teams and the use of BIM technology were front and centre. This revitalization project, helps preserve, improve, and breathe new life into the world's tallest inclined tower.