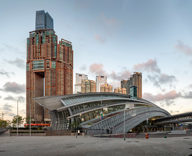 Sitting on a prominent site immediately adjacent to Victoria Harbour, Hong Kong West Kowloon Station, as one of the largest below-grade rail terminuses in the world, serves as a gateway to Hong Kong as well as a terminus to the high speed rail network of Mainland China.

The organisation of the design was inspired by the idea of forces converging on Hong Kong – wind, pedestrian flows, traffic and tracks coming into the station. Much attention has been given to architectural layering and orientation. The placement of the station entrance at the south-west corner, for instance, provides more frontage and value to the commercial areas, takes advantage of better views of the harbour and eases access, reflecting the urban reality of Hong Kong, and the need for an efficient use of land and floor area resources.

The architect maximises civic gestures both externally and internally. At the heart of the station is the enormous 20m-belowground central void. The main interior space is 180m long, with an average width of 65m and a maximum height of 45m. The roof is supported by large, tree-like column-bundles, lifting up 4,000 panes of glass, filling the station with light and allowing millions of passengers their first glimpse of the towers of the city even from the lower levels of the station.

This view is facilitated by the exterior ground surface that slopes down toward the hall – an area called Civic Plaza – and an accessible green roof that gestures toward the harbour; the height reaches 25m above ground. The station’s sweeping roof design encourages people to walk up the gentle paths to the top, through
a densely vegetated sculpture garden and landscaped extension of the green below. The resulting 3.5ha of open space offers a spectacular public vista over Victoria Harbour and towards Hong Kong’s skyline and Victoria Peak.

Ultimately, Hong Kong West Kowloon Station is a successful project with a sensitivity for human-scale detail and a commitment to the wellness of people. The architect was instrumental in pushing the brief to create more than four times the open space required in the programme and yet the team still managed
to achieve design with a sense of clarity, fluidity, accessibility and liveliness. In this project, architecture and engineering are seamlessly fused. The station will no doubt become an integral part of Hong Kong, profoundly transforming the way people interact with the city.