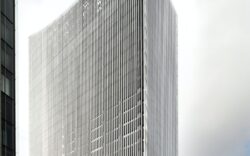 This mixed use super high rise integrates offices and a museum fulfilling the concept of "opening to the city and connecting to the environment."

The new high-rise, located in front of Tokyo Station in the capital of Japan, features cutting-edge technology and is mindful of the social environment of 2020, as the client requested. It is also home to a new prototype for an urban art museum - the Artizon Museum (formerly known as the Bridgestone Museum of Art). It holds a world-class art collection and takes on the task of sharing the art with the world.

This super high-rise (skyscraper) towers above the city as a symbolic centerpiece of economy, society, and civilization in the 21st century. On the other hand, we take on the challenge of the global environmental demands on our future while living in cities with many layers of history. We set a goal of creating “a skyscraper tuned into minimizing negative environmental impact and townscape”. Instead of separating offices and the museum, or dividing the building into an upper part and lower part, we have integrated the areas to make them part of the city.

The façade of the upper part of the building is one of the most distinctive features. It is based on traditional Japanese architecture with balconies all around for maintenance and some equipment, which are covered with louvers made of 80mm single aluminum extrusion. Their placement and orientation differ depending on the direction they face. Their positions were determined by computational analysis based on environmental parameters such as solar control, glare control, and energy saving purposes. Design-wise it creates an interesting appearance and a changing appearance according to the time of the day or the angle from which it is viewed. The façade is an environmental device that connects the interior and exterior vertically but opens up horizontally.

From the exterior design to the interior, the integration of both hard and soft aspects of the building tie it to the city and surrounding environment in an iconic way. Workers and visitors alike regularly enjoy the rich cultural experiences.