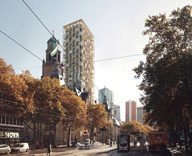 Located in Rotterdam’s bustling centre, this historically important building was built in 1916, and was one of the only original structures left standing after the Rotterdam blitz, the 1940 aerial bombardment that almost levelled the entire city.

In a subtle nod to context, the design mirrors the rhythm of the 5ft spacing between columns on the Postkantoor’s facade in a stone grid that defines the tower. Designed with nonpareil windows, the POST tower shows openings that vary in size and shape to funnel daylight. This variety marks a departure from the series of glass facade towers along the new Rotterdam skyline, and celebrates the elegance of the main hall along its profile.

At the street level, the majestic Great Hall – a vaulted, 1916 marvel soaring 22.5m (almost 74ft) in height – will undergo a faithful restoration to serve as the project’s public heart. A new entrance on Rodezand will render the hall accessible from all sides, and will connect with the building’s back courtyard to form a sweeping passageway. Throughout the hall and courtyard space, a slew of public amenities in the form retail, galleries, restaurants and cafes, many with open sight lines to Coolsingel will enhance the city’s pedestrian experience.