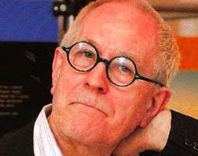 Professor Sir Peter Cook RA, founder of Archigram, former Director the Institute for Contemporary Art, London (the ICA) and Bartlett School of Architecture at University Col¬lege, London has been a pivotal figure within the global architectural world for over half a century. His ongoing con¬tribution to architectural innovation was rec¬ognised via the conferral of an honorary doctorate in April 2010 by the Lund University, Sweden. Peter’s achieve¬ments with radical experimentalist group Archigram have been the subject of numerous publications and public ex¬hibitions and were recognised by the Royal Institute of Brit¬ish Architects in 2002, when members of the group were awarded the RIBA’s highest award, the Royal Gold Medal.