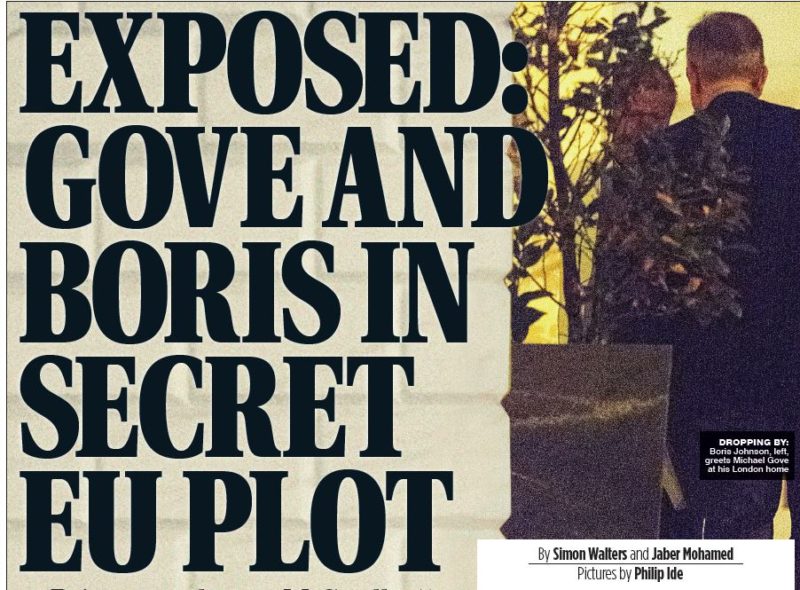 She picked up the top prize because, the judges said: “In a tumultuous year she rose to the challenge and made the story of Brexit her own.”

Syrian citizen journalists reporting for Raqqa is Being Slaughtered Silently were given the Marie Colvin Award. The judges said of this entry: “Given what those people have done and the price they have paid, it would be odd to put anyone ahead of them.”

The Guardian and BBC Panorama were both named winners of Investigation of the Year for their work on the Panama Papers scandal.

The prize for foreign journalism went to Channel 4’s Waad Al-Kateab who is currently trapped in the Syrian city of Aleppo.

“No-one could watch two brothers weeping for their dead sibling in a hospital surgery or her report on the life and death of a simple flower seller and not feel that this is as close as you can get to experiencing the full, immediate, unmediated horror of the Syrian catastrophe.”

Press Gazette editor Dominic Ponsford, said: “As an industry we face a constant fight for survival – attacked by everyone from Google and Facebook (taking our ads) to the police who have been jailing our sources and spying on our phone records.

“The work on display helps explain why what we do is important – and why it should be cherished and encouraged.

“This event aims to bang the drum for the best of what we do as the British industry which holds everyone else to account.”

The judges said: “While trawling through archives for the Mail’s 40th anniversary coverage of the Birmingham Pub bombings, Richards realised the inquest into the deaths of the 21 victims had been opened but never completed. Working with victims’ families the Birmingham Mail successfully campaigned for the inquests to be resumed. This was an excellent example of campaigning local reporting at its best: taking an important local issue, backing its readers and having a significant influence on the result.”

“He worked with a whistleblower to expose depravity and cover-ups. His entry was particularly impressive given the tight editorial resources on a free weekly local newspaper.”

“She has such a huge-track record of investigative journalism and has maintained her usual high standard yet again this year.”

The Guardian, Simon Goodley, for: Revealed: how Sports Direct effectively pays below minimum wage, A day at ‘the gulag’: what it’s like to work at Sports Direct’s warehouse and Sports Direct warehouse workers to receive back pay

“Simon Goodley’s undercover investigation into life at Sports Direct’s Derbyshire warehouse was business journalism which got results – prompting the company to ensure staff were paid at least the minimum wage and make other concessions. This was great public interest journalism.”

The Sunday Times, Oliver Shah, for: Close to the rocks, BHS on brink as rescue talks fail and My battle with the bullying billionaire

“He built up a relationship with Michael Green over many years and wrote with unrivaled authority on one of the biggest British business stories of the year.”

“This was a gripping account of the role of Tom Hayes in the Libor scandal based on in-depth research.”

“Shaun Lintern clearly knows his beat inside out. This was good, investigative journalism which had consequences. His reporting prompted the resignation of the Health Service Ombudsman, forced the health secretary to intervene over poor care which contributed to the death of a child and exposed a plot by junior doctors to drag out their dispute with the government.”

“A brave launch by Archant which cleverly saw there were  16.1m potential readers for a pro-European newspaper and which has successfully served that market by providing strong writing on matter of undoubted public interest.”

The Times, Rachel Sylvester, for: Being a mother gives me edge on May—Leadsom, As Labour splits, a new party is emerging and Gove picks cabinet fight over deal with Saudis.

“Rachel Sylvester has an extraordinary ability to get a hard news story out of every interview. Her interview with Andrea Leadsom led her to withdraw from the Tory leadership race and changed the course of British history. She also has fantastic contacts across all the parties and writes shrewd political analysis.”

Channel 4 News – FactCheck, Patrick Worrall, Georgia Graham and Kieron Bryan, for: Does the EU really cost £350m a week? Express goes bananas over the EU  and Will prices rise if we leave the EU?

“The judges would like highly commend both Channel 4’s Factcheck and the BBC’s Reality Check for the important work they did during the referendum campaign in testing the claims made by both sides.”

“This was an entry which demonstrated her clarity, authority and down to earth common sense reporting on a period of historic political upheaval.”

“This was brave, must-read journalism. Naming a leading British cyclist who had missed drugs tests on the eve the Olympics changed the story of British cycling. Matt Lawton is a sports journalist who is not afraid to investigate his own patch – his access was fantastic and he knows his subject inside out.”

“Billy Kenber’s investigation into the extortionate prices charged by a small group of entrepreneurs for vital NHS drugs had everything. He spent three months digging then named names and got results, prompting the government to tackle this shocking issue.”

“This was dogged and determined reporting. Any newspaper would want to have a journalist of this quality on their staff.”

Campaign of the Year sponsored by Bournemouth University

“This was a hard-hitting campaign which was relevant to everyone who depends on the NHS for their health. Martin Halle and the Sunday People uncovered serious failings at an NHS trust and stayed with the story until the issues were addressed. This was a particularly impressive achievement for a freelance journalist working without the support of a big team.”

“This was a revelatory campaign because no-one knew about these dreadful pollutants. The Daily Mail has put this issue at the top of the news agenda making a powerful case for micro beads to be banned.”

“This was an investigation which revealed how Age UK was making millions by selling pensioners energy and insurance deals which were not the best value on the market. It showed how a tabloid newspaper can have more positive impact than any other media when it goes for it with a story.”

Scoop of the Year

“A great story beautifully projected by the Telegraph. Charles Moore combined tact, charm and sensitivity to persuade the archbishop to cooperate with him on the article. The result was a story which corrected the historical record and prompted a national debate about family and parentood.”

Photojournalism sponsored by The Mega Agency

“This was photography which told the British people what was going at a crucial point in the Brexit story. Philip Ide would have to wait for hours to get capture these images but the result was a piece of journalism which bore witness to history.”

TheGuardian.com for: 6X9 – A virtual experience of solitary confinement

“Crusading journalism at its 21st century best, and very powerful storytelling indeed. The use of virtual reality was a genuine innovation and was accompanied by video, podcasts, personal narratives and long-form journalism to beautifully convey this story.”

“A fantastic piece of data journalism which used digital techniques to add a new dimension to the story.”

Investigation of the Year sponsored by Transparency International

The Guardian for: The Panama Papers

“The Guardian revealed secret billion dollar deals linked to Vladimir Putin and David Cameron’s links to secret offshore fund. This was another vast investigation by The Guardian which shone a light in some of the darkest corners of international finance.”

“The BBC exposed a billion dollar money laundering ring in Russia and a criminal conspiracy with links to Vladimir Putin. It also showed how Mossack Fonseca helped launder the proceeds of the Brinks Matt robbery and it prompted the resignation of Iceland’s prime minister by revealing his secret offshore company. They managed to break down a vast investigation into a series of compelling stories which had global impact.”

The Sunday Times, Oliver Shah, for: Close to the rocks, BHS on brink as rescue talks fail and My battle with the bullying billionaire

“Oliver Shah deserves great credit for exposing Green’s character and lifestyle and showing him up for the man he is.”

“These were three compelling pieces from Istanbul, Lesbos and Berlin. The first cut through the chaos of the early hours of the Turkish coup, the second highlighted the cruel impact of a realpolitik deal between Turkey and the EU on refugees and the third went from Berlin to the hell of Raqqa via a group using digital journalism to fight back against ISIS.”

Channel 4 News, Waad Al-Khatib, for: A life in the day of Aleppo, The last flower-seller of Aleppo and Mayissa’s story

“Waad Al-Khatib’s sensitive, visceral reports from Aleppo showed immense bravery. No could watch two brothers weeping for their dead sibling in a hospital surgery or her report on the life and death of a simple flower seller and not feel that this is as close as you can get to experiencing the full, immediate, unmediated horror of the Syrian catastrophe.”

Journalist of the Year sponsored by Gorkana Jobs

“Laura Kuenssberg deserves this prize for the sheer volume and scope of reporting on some of the biggest changes ever in British politics when she was just into the job of BBC political editor. In a tumultuous year she rose to the challenge and made the story of Brexit her own. In the days and weeks after the Brexit vote she seemed to be everywhere. Her moving interview with Brendan Cox showed sensitivity and compassion. She lead the way on reporting the fast-moving developments in the Tory leadership race. And she did our profession proud when she put the Chinese President on the spot about human rights abuses with the one question allowed to the British media at his London press conference.”

The Marie Colvin Award (supported by Reporters Without Borders)

Raqqa is Being Slaughtered Silently.

“This year’s recipients are a group of young men from Syria who began publishing online in 2014 as a form of peaceful challenge to the human rights abuses being perpetrated by ISIS in their city. They became the only media balance to the slick ISIS propaganda coming out of Raqqa and the most read source of news about the area. Hundreds were arrested for merely liking their Facebook page. Their friends and family have been murdered by ISIS as a way of trying to stop them from publishing. Several members of the group have been themselves murdered by ISIS. One of the British Journalism Awards judges said: Given what those people have done and the price they have paid, it would be odd to put anyone ahead of them.”